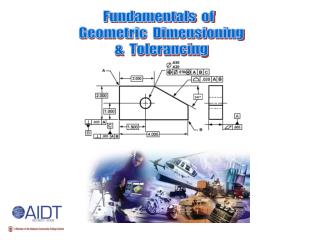 Geometric Dimensioning and Tolerancing - . chapter 1, introduction. history. during the early period of manufacturing

GEOMETRIC DIMENSIONING AND TOLERANCING (GD&amp;T) - Purpose is to describe the engineering intent of parts and

Chapter 2: Fundamentals I - . after completing this chapter, you will be able to do the following:. construct geometric

Tolerances - . introduction. tolerancing technique of dimensioning parts within a required range of variation to ensure