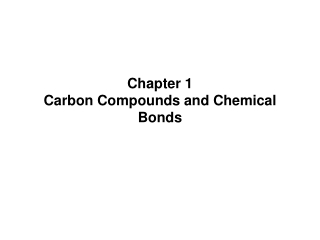 CHAPTER 25 - CARBON AND ITS COMPOUNDS - . organic - pertaining to life living or was once living organic chemistry - the

Chapter 1 Carbon Compounds and Chemical Bonds - . introduction organic chemistry the chemistry of the compounds of carbon

Compounds of Carbon - . chapter 8. why is carbon important?. carbon makes up over 90% of all chemical compounds they form

Elements and Compounds - . elements combine together to make an almost limitless number of compounds the properties of

Chapter 6.1 - . elements combine to form compounds. definition of compound. a substance made up of atoms of two or more

Carbon Compounds - . 6.3 pages 157-163. carbon compounds. what does it mean to be organic? organic compounds- compounds