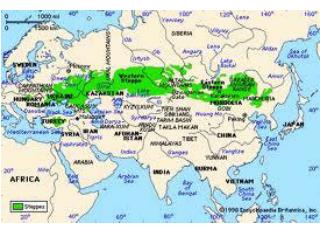 Steppe. 250,000,000 acres A grassy, shrubby plain Soil called black-earth One of the world’s most productive No trees grow naturally Bread basket of Russia. Sochi. Occupied since ancient times Part of the Roman Empire Destroyed by the Mongols Became Russian territory in 1829 The Steppe - . introduction. the steppe is a flat area characterised by its abundant plains without trees and with short

Steppe and Prairie Biome - . blake toombs dominique tines . what is a steppe and prairie . a steppe is russian for

I Am a Steppe - . in this project, students will be able to: identify the characteristics of a steppe state the effects

Grassland and Steppe Biome - . katie hagen &amp; terry thibodeaux. what is steppe?. steppe is the russian word for

Endless Steppe Chapter Review - . tell what chapter you are reviewing. a place where an important scene is drawn and

Mongolian National Folklore Ensemble, “Praise of Altai Mountains,” Voices of the Steppe - . the rise of the mongols.