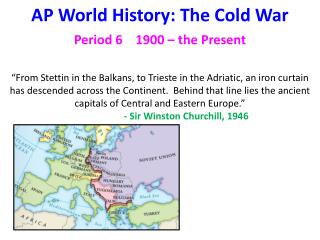 AP World History: The Cold War. Period 6 1900 – the Present “From Stettin in the Balkans, to Trieste in the Adriatic, an iron curtain has descended across the Continent. Behind that line lies the ancient capitals of Central and Eastern Europe.” - Sir Winston Churchill, 1946. Math Makes the World(s) Go ‘Round - . a mathematical derivation of kepler’s laws of planetary motion. by dr. mark

Cold War - . essential questions. what conditions and issues led to mistrust between the u.s. and ussr, thereby leading