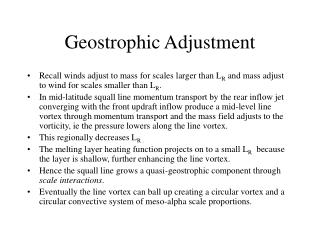 Geostrophic Balance - . the “geostrophic wind” is flow in a straight line in which the pressure gradient force

Geostrophic and thermal wind - . reminder. geostrophic wind in pressure coordinates in the free atmosphere, wind is

Adjustment Disorders - . a category of compromise?. some people react to a major stressor in their lives with extended

The Semi-geostrophic system of equations - . for development of these equations, we will use “geostrophic

Cultural Adjustment - . with… the woodbridge board 2007-2008. board introduction. “ culture shock ”. symptoms:

SEASONAL ADJUSTMENT - . bea advisory committee may 11, 2012. what do users want?. data series that represent the concept