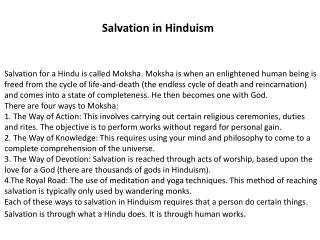 Salvation in Hinduism. Salvation for a Hindu is called Moksha. Moksha is when an enlightened human being is freed from the cycle of life-and-death (the endless cycle of death and reincarnation) and comes into a state of completeness. He then becomes one with God. There are four ways to Moksha: Salvation In Suffering - . i peter 1:1-12. i. hope sustains christians. a. the lord gives us a living hope. the source of