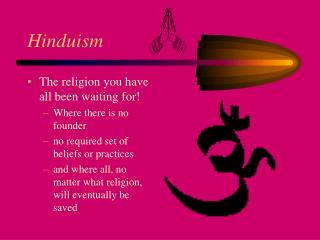 Hinduism. The religion you have all been waiting for! Where there is no founder no required set of beliefs or practices and where all, no matter what religion, will eventually be saved. Hinduism. Hinduism is the oldest of the religions we will study, and the 3rd largest