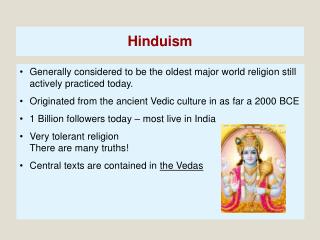 Hinduism. Generally considered to be the oldest major world religion still actively practiced today. Originated from the ancient Vedic culture in as far a 2000 BCE 1 Billion followers today – most live in India Very tolerant religion There are many truths!