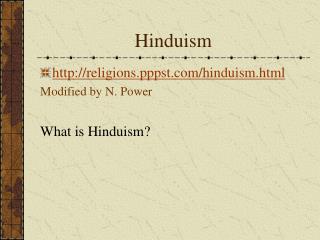 Hinduism. http://religions.pppst.com/hinduism.html Modified by N. Power What is Hinduism?. What is Hinduism? . One of the oldest religions of humanity The religion of the Indian people Gave birth to Buddhism, Jainism, Sikhism Tolerance and diversity: "Truth is one, paths are many"