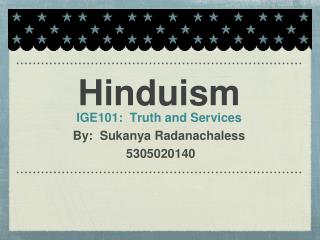 Hinduism. IGE101: Truth and Services By: Sukanya Radanachaless 5305020140. Quick facts about Hinduism. The religion of most people in India and Nepal . It has over 900 million followers around the world . The oldest living religion The third largest religion No single founder