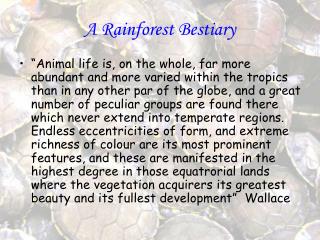 Medieval Bestiary - . what is a bestiary?. a bestiary is a ‘dictionary’ that lists both real and imaginary creatures.

A Bestiary of ANOVA tables - . randomized block. null hypotheses. no effects of

A Bestiary of ANOVA tables - . randomized block. null hypotheses. no effects of

A Rainforest Animal - . the macaw. by achilleas papadimitriou. general information. there are 17 species of macaws living

A Rainforest Adventure - . find out more about the plants and animals that live there by stephanie baker, debbie bates

The Medieval Bestiary - . rane squires april 27, 2010. the bestiary. the medieval bestiary is a collection of creatures,

The Aberdeen Bestiary - . f16r t he fox is crafty and deceitful. when it is hungry it rolls in red earth to look as if it

A Bestiary of Experimental and Sampling Designs - . the design of an experiment. the details of: replication,

A Bestiary of Experimental and Sampling Designs - . reminders. the goal of experimental design is to minimize the

Rainforest - . by e llie r enshaw. introdution. animals are getting exscinded in the rainforest for many reasons such as