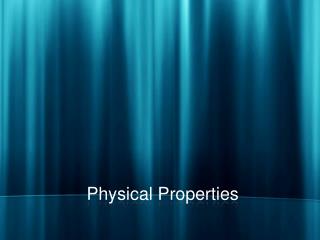 Physical Properties. (2.2)PHYSICAL PROPERTY. A physical property is any characteristic of a material that can be observed or measured without changing the composition of the substances in the material.

The Relationship Between Physical Activity and Health - . physical activity any body movement resulting in a substantial

ENERGY - . specific heat and phase changes. definition of chemistry. reminder: at the beginning of the year we defined

Physical and Chemical Properties and Reactions of Alkenes and Alkynes - Che-240 unit 3. physical and chemical properties

3c. Filaricele Surgery Training Presentation Section C - . this presentation is one component of a larger resource