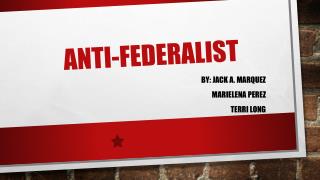 The Federalist Papers - . most countries in the world are unstable. most groups are concerned more with what could

Amending the Constitution - . presentation by phil duffy. there are two methods of curing the mischiefs of faction: the

ANTI LOCK BRAKING SYSTEM - . introduction. wheel lockup during braking causes skidding which in turn cause a loss of