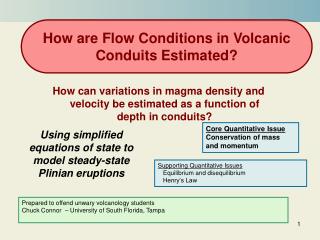 How are Flow Conditions in Volcanic Conduits Estimated?. How can variations in magma density and velocity be estimated as a function of depth in conduits?. Core Quantitative Issue Conservation of mass and momentum. State Equations - . bioe 4200. processes. a process transforms input to output states are variables internal to the

Equations of state (EOS) - . an eos is a relation between p, v and t. the eos known to everybody is the ideal gas

Solow Growth Model: The Steady State - . = 0. effect of increasing the investment rate on the steady state. speed of

Stellar Equations of State - . we have developed an electron-positron equation of state based on table interpolation of