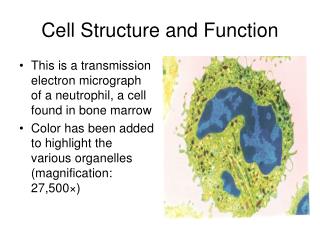 Cell Structure and Function. This is a transmission electron micrograph of a neutrophil, a cell found in bone marrow Color has been added to highlight the various organelles (magnification: 27,500×) . Life Is Cellular . Look closely at a part of a living thing, and what do you see?

CHAPTER 7: CELL STRUCTURE AND FUNCTION - . chapter 7 – the cell – iq # 1. what century did the use of the microscope