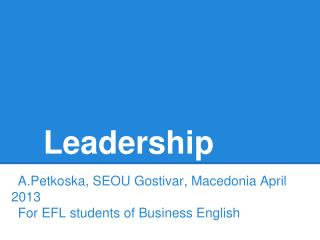 Leadership. A.Petkoska, SEOU Gostivar, Macedonia April 2013 For EFL students of Business English. "We all work together as a team. And that means you do everything I say.". Michael Caine, British film actor (in the film The Italian job )

What Leaders Really Do - . leadership and management. leadership not mystical and mysterious not charisma or personality

BASIC STRATEGIC LEADERSHIP SKILLS - . who is a leader? a person who has the capacity and will to rally men and women to a

Role of Instructional Leadership - . purpose of session. explore the term ‘instructional leadership’ and what it

Situational Leadership - . donna shea, m.ed. objectives . by the end of this presentation you should be able to: discuss