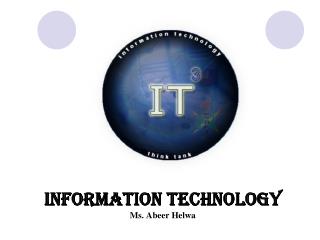 Information Technology Ms. Abeer Helwa - . fields of using it in our daily life. computer in education. schools have

Information Technology Ms. Abeer Helwa - . software. software. they are instructions that tell the computer what to do

INFORMATION TECHNOLOGY - . information and data. introduction. information consists of facts and items of knowledge. it