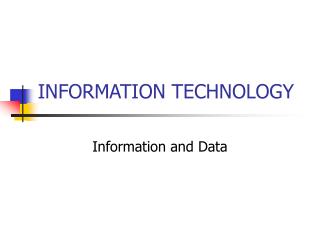 INFORMATION TECHNOLOGY. Information and Data. Introduction. Information consists of facts and items of knowledge. It can be anything that has meaning to people. A list of names and addresses The contents of a letter The words of a song A map Information Technology - . extended work-based project september 2003. session objectives. to give you a brief