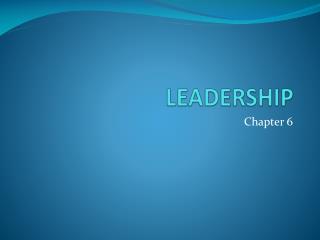 LEADERSHIP. Chapter 6. Some leaders are visionaries Others use their position of power Others persuade us to do what they want. Basics of leadership What is leadership Relationship between leaders and followers How leaders are chosen or emerge Personality theory Behavioural theory