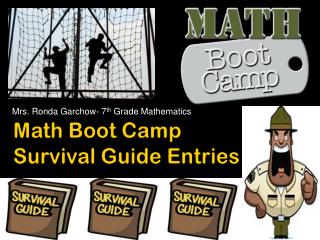 BOOT CAMP - Grammar. boot camp. http://www.youtube.com/watch?v=7kdrsprznk8. define. what is grammar?. according to

Survival camp - . all the pupils from class 3-6 were going to a survival camp for a whole day !. but us in class 5 and 6

Grammar Boot Camp - . parts of speech challenge each group is responsible for one part of speech (with one exception–