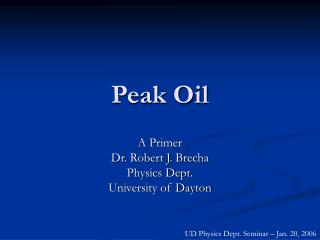 Peak Oil. A Primer Dr. Robert J. Brecha Physics Dept. University of Dayton. UD Physics Dept. Seminar – Jan. 20, 2006. Outline. Basic background (Where are we?) Models and predictions (Where are we going?) Economics (Maybe somebody knows …) Alternatives (How else might we get there?)