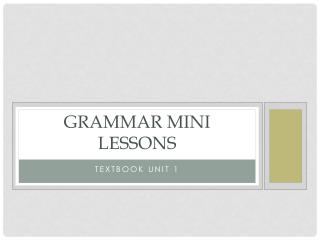 Grammar Mini Lessons - Short story unit. grammar mini lessons. nouns. a noun is a word or word group that is used to name

Grammar Mini Lesson - . direct and indirect objects lecture notes. what you should know about objects. an object is often

Grammar Mini-Lesson - . #1. there their they’re. when you speak, there , their , and they’re sound alike. however,

Grammar Mini Lesson - . prepositions, conjunction and interjections. preposition. a preposition is a word that shows the

USH Mini Lessons - . day 1. 1. when did england officially recognize the us? 2. when was the us constitution ratified? 3.

Vocabulary “Mini Lessons” - . advanced composition. you will become the teacher (for about 2 minutes ). every day

FCIM Mini-lessons - . using the power-point presentations. why use these presentations?. the fcim power points are a

Mini-Lesson #60 From the UWF Writing Lab’s 101 Grammar Mini-Lessons Series - Diction: then versus than. what’s the

Algebra 1 Mini-Lessons - . the line shown in the graph below can be represented by the equation y = + . which of the