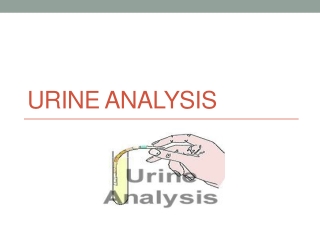 Urine analysis. Macroscopic urinalysis. Is the direct visual observation of the urine, noting its volume, color, clarity or cloudiness, etc Normal urine is typically pale yellow and clear . Obvious abnormalities in the color, clarity, and cloudiness may suggest different diseases. Proteinuria. Analysis of urine - . seminar no. 11 - chapter 12 -. filtration of plasma. glomerular membrane is a filter

Urine Examination/Analysis BioKit - . carolina biological $ 162.00. this lab will allow the student to test their own

urine test - Many of these substances can be found only in certain amounts in urine, so their higher or lower

urine culture - . pathophysiology of urinary tract infection. ascending route of infection is the most common.