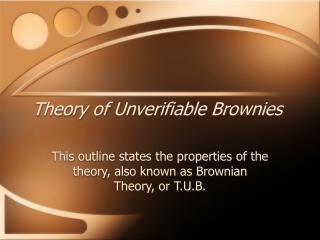 Theory of Unverifiable Brownies. This outline states the properties of the theory, also known as Brownian Theory, or T.U.B. Basic Principles. Completeness: Everything happens because of the actions of logically unverifiable brownies. Uniqueness: Every brownie is unique. Benefits of Using Weed Brownies - Benefits, appropriate conditions and effects of weed brownies the use of weed edible

Security Standardization in the Presence of Unverifiable Control - The university of texas at dallas. chul ho lee with

Sugar-Free Brownies - Trying to be healthy throughout the day is hard enough, but when those late-night cravings for