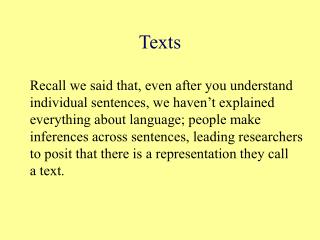 Texts. Recall we said that, even after you understand individual sentences, we haven’t explained everything about language; people make inferences across sentences, leading researchers to posit that there is a representation they call a text. Texts. 3 levels: Texts and Other Texts - . central focus: intertextuality —”the way that texts are always related to and dependent

Annotating Texts - . what is annotation?. dictionary definition: . a note of explanation or comment added to a text. a

Work-Texts - . the workplace is a much different environment compared to school or even the home. in a work environment,

Informational Texts - . informational texts help you solve problems. they give you detailed directions they show you how

Instruction Texts - . read and follow instructions. how to prepare my favourite cereal. do now. circle the instructional

Beautiful Texts - Can i find it beautiful without taking any personal message from it? ... her red lips (momma said it

Visual Texts - . what is a visual text?. a visual text is a text in which the image plays a major role in the

Persuasive Texts - . unit 9: persuasion and argumentation . persuasion. definition: a means of persuading someone to do