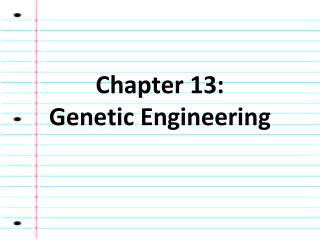 Chapter 13: Genetic Engineering. Modifying offspring’s appearance at the NON-DNA level. Selective Breeding HOW: allowing only those animals with desired characteristics to produce the next generation Pros: t akes advantage of naturally occurring genetic variation in organisms CHAPTER 13 - . genetic engineering. brain teaser:. how can a sheep that is 12 years old have an identical twin that is

Chapter 13: DNA Technology - . with all our knowledge of dna and genes, is there any way to manipulate dna?. genetic