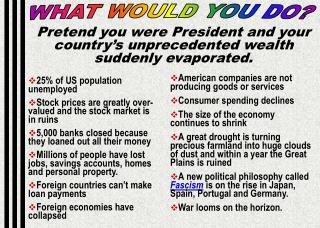 WHAT WOULD YOU DO?. Pretend you were President and your country’s unprecedented wealth suddenly evaporated. American companies are not producing goods or services Consumer spending declines The size of the economy continues to shrink Population Distribution in Italy - . learning target: to explore the reasons for the distribution of people in italy.

Unit II - . population &amp; migration. demography is: . a) the study of the relationship between government and

Unit II - . population &amp; migration. demography is:. a) the study of the relationship between government and

Unit II: Fundamentals of Population - . what is population geography?. demography :  the statistics relating to

Chapter 1 Review - . test wednesday aug. 18. question. explain the difference between a sample and a population. .

Agriculture - . where did agriculture originate? what does von thunen’s model say about agriculture? what problems do