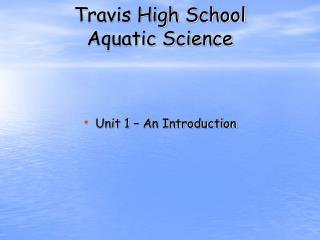 Travis High School Aquatic Science. Unit 1 – An Introduction. World Ocean. All oceans of the world are connected. Could a ship attempting to travel through all oceans do so without being stopped? What about ice? The waters beneath the ice do connect the ocean basins. Ocean Basins. Atholton High School Science - . lab safety. 1. listen to or read instructions carefully before attempting to do

Teaching High School Computer Science… - . … as if the rest of the world existed. problems implementing effective

Marine Science Tahoma High School - You may never have given it much thought but. where does sand come from?how can you