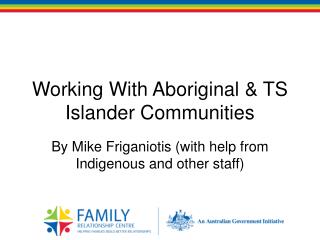 Aboriginal Sacred Tobacco Use: What Should You Know as a Researcher and Practitioner? - Lynn lavallée, phd candidate

Module 2: Aboriginal History and Political Governance - . welcome to the learning module on aboriginal history and

Professional Learning Communities (PLC) - . where do we begin? (adapted from professional learning communities at work

Aboriginal Peoples - . of canada. the importance of words. the word “ aboriginal ” includes all first nation, metis

Video Mobility Solutions for Public Safety - . what are digital communities?. today you will learn. how digital

The Role of Online Communities in Diabetes Management - . using social networking to improve self-care and standards of