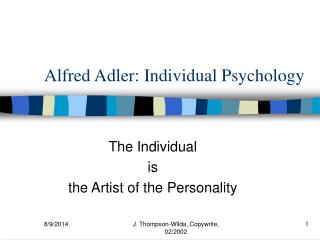 Alfred Adler: Individual Psychology. The Individual is the Artist of the Personality. Alfred Adler: 1870-1937. Born in suburb of Vienna Second son of family of 4 boys, 2 girls Was unhealthy as a child Decided to become a doctor “in order to overcome death and the fear of death”