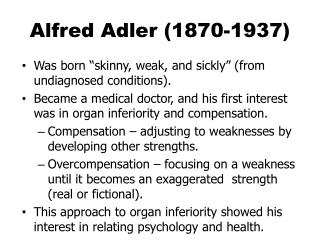 Alfred Adler (1870-1937). Was born “skinny, weak, and sickly” (from undiagnosed conditions). Became a medical doctor, and his first interest was in organ inferiority and compensation. Compensation – adjusting to weaknesses by developing other strengths.