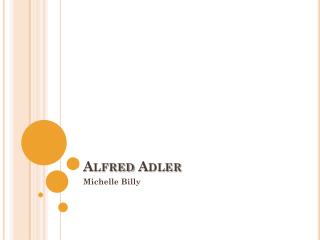 Alfred Adler. Michelle Billy. Alfred Adler’s life. Born on February 7, 1870 in the suburbs of Vienna He didn’t walk until he was four because he had rickets Rickets is when the bones are very weak and start to soften because of a lack of vitamin D, calcium and phosphate