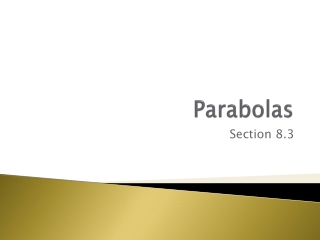 Parabolas. Section 8.3. You have studied parabolas in several different lessons, and you have transformed parabolic graphs to model a variety of situations. Now a locus definition will reveal properties of parabolas that you can use to solve other practical problems. 9.1 Parabolas - . parabolas. notice that the axis of symmetry is the line through the focus, perpendicular to the

Unit #3: Quadratics 5-3: Translating Parabolas - . essential question: how is the vertex form used in transforming a

Families of Parabolas - . share the axis of symmetry. have the same shape. share the same vertex. graph each group of