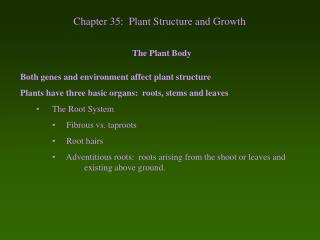 The Plant Body. Both genes and environment affect plant structure Plants have three basic organs: roots, stems and leaves The Root System Fibrous vs. taproots Root hairs Adventitious roots: roots arising from the shoot or leaves and existing above ground. Chapter 6 - . microbial growth. q&amp;a. oxygen in the atmosphere is essential for human life. how can some bacteria

Chapter 5 Cell Structure - . warning!!. much of this chapter is covered in biology i so the pacing will be rapid. focus

Chapter 39 Plant Responses to External and Internal Signals - . getting from a signal to a response involves three steps: