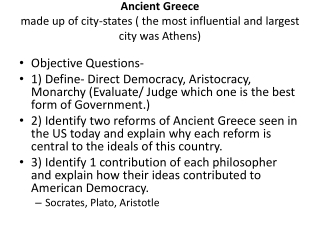 Ancient Greece made up of city-states ( the most influential and largest city was Athens). Objective Questions- 1) Define- Direct Democracy, Aristocracy, Monarchy (Evaluate / Judge which one is the best form of Government.) THE GEOGRAPHY AND CITY-STATES OF ANCIENT GREECE - . essential question : what role did geography play in the development

City States of Greece - . geography of greece. peninsula jutting into the mediterranean sea made up of over 4000 islands

Ancient Greece Wrap up! - . the beginnings. athens was not always a democratic c ity state…. past to present!. key

City-States of Ancient Sumer - . the fertile crescent. the area that curves from the persian gulf to the eastern

Ancient Greece - . the geography of greece. near anc. civs . of the mideast /egypt. access to black sea grain.

Ancient Greece - . a step back in time. which type of government would you prefer?. monarchy- power held in a family