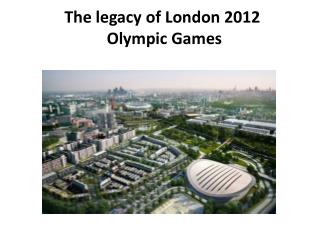 The legacy of London 2012 Olympic Games The legacy of London 2012 Olympic Games. Measuring the success of the Games . The 2012 Olympics and Paralympics are now a fading memory but their legacy has only just begun. Before the Games there was doubt that the cost - £9.3 billion - could be justified for a few weeks of sport.

The legacy of London 2012 Olympic Games