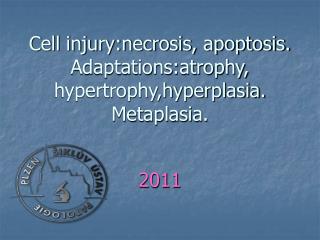 cell injury ii cellular adaptations - Hyperplasia. increase in the number of cells in an organ or tissuemay or may not be

APOPTOSIS - . what is it? why is it important? how is it controlled? what is its role in age-related disease?. apoptosis.

CELL INJURY AND DEATH - . by dr.k.v.bharathi. cell injury. results when cells are stressed so severely that they are no