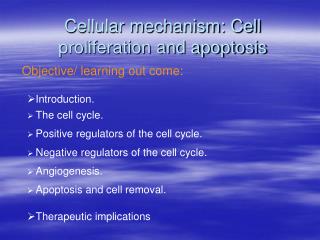 Surgical Oncology - . definition of neoplasia. a disorder of cell growth in which there is a permanent and inherited

3 The Cellular Level of Organization - . an introduction to cells. cell theory developed from robert hooke’s research

Management of Chemo-immunotherapy toxicities - . characteristics of cancer cells –the problem to us all. cell cycle

How Cell Phones Work - . lucid summer workshop july 27, 2004. an important technology. cellular telephony is one of the

Apoptosis, necrosis, and death - Chapter 18 continuity of life only from existing cells come new cells. we are all