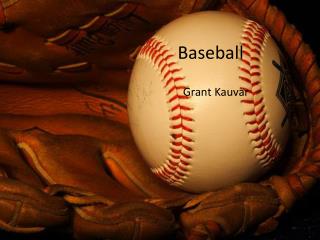 Baseball. Grant Kauvar. What is Baseball?. Baseball is a sport in which a ball and bat is used. There are two teams in a game consisting of nine players each. The goal is to hit a score runs on offense and to get outs on defense. Baseball - . blood and immunity pick your line-up and create your team name!. what is the scientific name for a white

Baseball - By: marcus engh. baseball. i played it a good part of my life it’s a hard sport to play it’s fun to play.

Baseball - . b. ms. shaw played for the comets, the c hicago bandits, and michigan wolverines. she traveled in the u.s.

Baseball - . how many players/referees has it got?. the number of players on a baseball team 25 on the team 9 on the

Baseball - . by robert morris. what position is played from the top of a mound?. field positions for 100. pitcher. what

Baseball! - . yet another way to review for the kcct test. question. the diagram below shows a simple food web. which

Baseball - . mitt. bat and ball. baseball field. second base. first base. third base. home plate. big players in the

Baseball! - . by- daniel nguyen. why is baseball so popular?. baseball is popular because it is considered one of

Baseball - . the muscular system. what role does atp play in muscle contraction? answer: it is the source of energy for