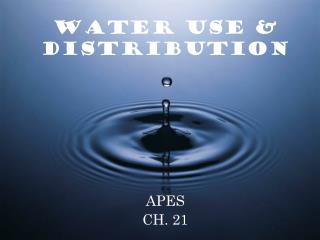 WATER USE & DISTRIBUTION. APES CH. 21. Key H 2 0 Characteristics. Water is the prime constituent of all living organisms. Water moves easily-from one physical state to another, and from one place to another. Water slowly absorbs and releases large quantities of energy. 2-2 Properties of water - . polarity : a compound’s uneven distribution of electrons. what is polarity?. polarity acts

Population Distribution in Italy - . learning target: to explore the reasons for the distribution of people in italy.