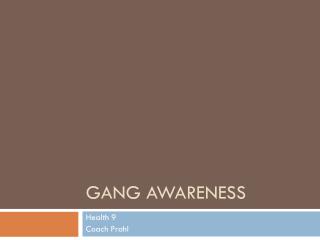 Gang Awareness. Health 9 Coach Prahl. Warm-Up Activity. On a sheet of paper, write your opinion to the following questions. 1. What is your definition of a gang? 2. What are common traits of a gang? 3. How do gangs redefine the idea of family?. I. What is a gang?. Gang Awareness - Workshop for parents and educators time: hour and a half workshop or half day workshop history of gangs