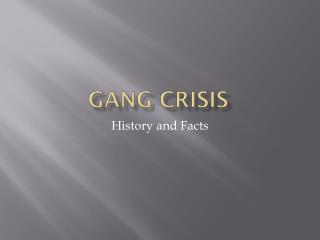 Gang Crisis. History and Facts. National Gang History. Gangs have been in existence for as long as there have been inhabitants of this world. Gang Culture - . why do gangs exist? how long have they existed? why does it matter? by: bethany thomas. the history. the