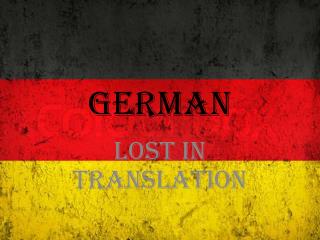 German - . literacy. curriculum. we expect students coming into second grade to be able to do the following: -recognize

German Soccer - By: gabriel soccer’s popularity soccer is the most popular sport in germany as well as in the rest of

German Language - Standard german has around 90 million native speakers, and other varieties of german have some 30

German Easter - . ausgeblasene eier. the custom of boiling and painting eggs are symbols of new life; the bright colors

German shepherd - . by: andres heiman. shoulders-this is the joint at the uppermost part of the german shepherds

German Diaspora - . a significant portion of ethnic germans had lived and some still live in central and eastern europe

German Tribesman - The leader of each clan was a cheiftan with a iron helmet. the main german god was wodan the god of