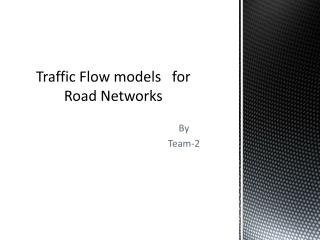 Traffic Flow models for Road Networks. By Team-2. INTRODUCTION. Traffic congestion is a serious problem, that we have to deal with in order to achieve smooth traffic flow conditions in road networks. Traffic Safety Products For Road - Traffic safety products may be serious tools or ones used for recreation. their sturdy

Road Traffic Legislation - . the main offences with which people can be charged with: reckless driving careless driving