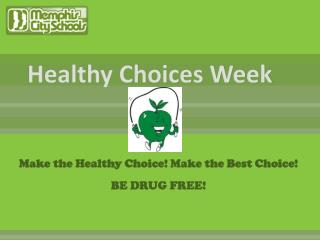 Healthy Choices Week - . madison county high school wants you to make healthy choices in what you eat, drink, and do now

Healthy Choices, Healthy You - . practice making healthful decisions. what is good, what is

Healthy Milk Choices - . what type of milk does your family drink?. what have you heard about lowfat milk?. h ave you

Healthy food choices - . i want to be healthy. what should i eat?. “eat food. not too much. mostly plants.”

Making Healthy Choices - . you are what you eat!! . the focus today is on healthy packed lunches. we are a healthy