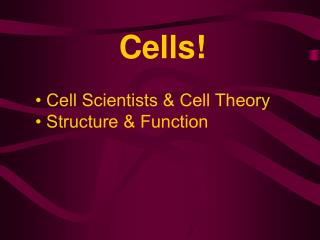 Diseases of Blood Cells - . back to basics. blood is a liquid tissue a mixture of cells and water the water contains

3 The Cellular Level of Organization - . an introduction to cells. cell theory developed from robert hooke’s research

Chapter 2 Nerve Cells and Nerve Impulses - . membrane : separates the inside of the cell from the outside environment

Cell Division—Mitosis Notes - . cell division — process by which a cell divides into 2 new cells. why do cells need