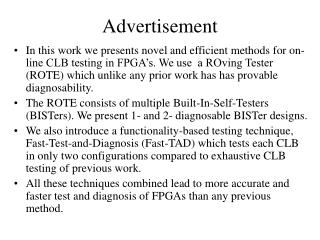 Advertisement. In this work we presents novel and efficient methods for on-line CLB testing in FPGA’s. We use a ROving Tester (ROTE) which unlike any prior work has has provable diagnosability. Advertisement - . adventure exotic zoo. billboard. with e.a.z. entertaining your family is a breeze for more information

Advertisement analysis - . nespresso. what else?. andrea furlan 5 a 16 th december 2012. the tv ad. click above to