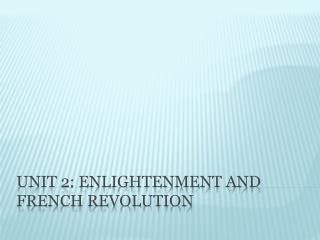 Unit 2: Enlightenment and French revolution. What were some of the ideas/Themes of the enlightenment? Based on what we learned yesterday, does an absolute monarchy support these beliefs? . absolutism. Absolutism Chapter 5: The Enlightenment and American Revolution - . section1: philosophy and the age of reason. section 1

WHICH PRESIDENT PURCHASED LOUISIANA ?? - . thomas jefferson. how will these two people solve their differences?. they

Unit 5 Review - . 1750 ce—1914 ce. 1. which of the following statements concerning the political philosophy of the

Philosophy of the New Age and Enlightenment - . general characteristics of the new age philosophy . f. bacon’s

Democracy: American and French Revolutions Theme: The effect of Enlightenment ideas on government and society - . lesson