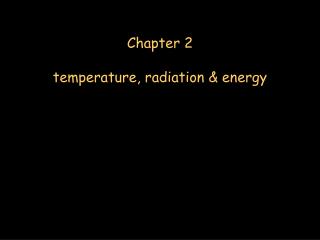 Chapter 2 temperature, radiation & energy. Temperature vs. Heat. Why is this man unharmed?. Temperature: A measure of internal energy (in this case, 1575 o F). Heat: Thermal energy transferred between systems at different temperatures.

Chapter 5 Ground Rules of Metabolism Sections 1-5 - . energy. we define energy as the capacity to do work one form of

Chapter 37 Radiation and Pregnancy and Genetic Effects - . from the first medical application of x-rays, there has been a