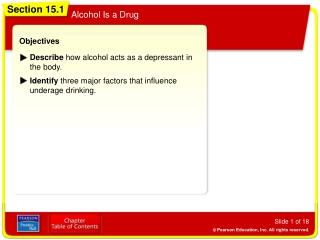 Section 15.1. Alcohol Is a Drug. Objectives. Describe how alcohol acts as a depressant in the body. Identify three major factors that influence underage drinking. Quick Quiz See how many of these questions you can answer “ yes ” to.